In mid-May, the University Library (UB) informed university members that due to the urgent need to consolidate the university budget, the Open Access Publication Fund and the Open Access Monograph Fund must be closed with immediate effect. Fortunately, the UB was able to acquire third-party funding for the publication of journal articles (Gold Open Access) as part of the DFG program "Open Access Publication Costs" for the funding years 2022 and 2023. These funds could now be used in part to make funding for Open Access to a certain extent possible again in 2022. Contributions to gold Open Access journals can now be funded with a maximum of 700 euros gross (= amount of the DFG flat rate/contribution in the funding program "Open Access publication costs").
Please also see our news item: Partial resumption of open access funding.

Open Access (OA) stands for the free access to scientific information. The data can be viewed without restrictions on the internet and can be downloaded, read, printed or distributed freely. All the rights of the author to his contribution for the scientific process are maintained.
Scientific publications in open access journals are published very fast and can therefore be found, distributed and cited quickly. The quality control is mostly of the same manner as in traditionally published journals.

The enormous increase in subscription prices of the established publishers have forced libraries to cancel many subscriptions in the past years. Open access shows an alternative way for scientists to publish their articles, whereby new ways of financing the publication fees are found. Many research organisations support this new path of free access to publicly financed scientific results: Berlin declaration of open access to scientific knowledge.

In the "golden road" scientific work is directly published in an open access journal or by an open-access publisher. The costs which occur by publishing open access journals are covered via different models.
In the author financed model the author pays the publication fees or article processing charges directly. Another possibility is financing the fees via institutional memberships in some publication plattforms (such as BioMedCentral). Some journals do not require any fee. The Journal for Music and Performance (Act - Zeitschrift für Musik und Performance ) for example is published at the University of Bayreuth. Funding from the DFG could successfully be raised for this journal.
In the "green road" scientific work is published via a document server or an institutional repository. In case the work has already been published it is a so called parallel publication. Specific scientific document servers exist for certain scientific disciplines (such as arXiv, SSOAR, etc.). The University of Bayreuth provides a publication and document server called EPub Bayreuth where members of the University of Bayreuth can publish their work. Via this service it is also possible to publish series as open access (for examples see the Open Access series in EPub Bayreuth).

Predatory open access is the attempt to exploit the business model of open access. Some publishers try to use the "golden road" of open access in order to gain money from the publishing fees without providing the editorial and publishing services of regular open access publishers. In recent years the number of these suspicious publishers has dramatically increased.
Scientists are lured into publishing in mostly relatively new journals without giving information about the publication fees. If an article is submitted to these journals a transfer of copyright has sometimes already taken place. The scientist then receives a notice of the publication fee and maybe even additional requests. He then no longer has the possibility to publish his article elsewhere if he decides not to publish in this journal anymore. Some of these publishers are letter-box companies where the adress of the editor is not in the same country as the bankaccount where the fee is to be transfered to.
Complaints associated with predatory open-access publishing:
A list of these suspicious journals and publishers was maintained by the librarian Jeffrey Beall from the University of Colorado Denver. Unfortunately the list was taken offline in January 2017 due to "threats & politics". The cached versions from internet-archiving services are still available. The list was published online together with a row of criteria (cache of the WayBackMachine) with which scientists can discover if a journal or publisher is to be trusted and with which he evaluates phoney publishers.

For his work and clarification he receives applause from representatives of the open access movement as well as critique and threats from the enlisted publishers.

The University Library also has a special site with more information on Predatory Publishing.

The Open Access Publication Fund of the University of Bayreuth

The University of Bayreuth also promotes the ideals of open access (Open Access Strategy of the University of Bayreuth). As a support an Open Access Publication Fund has been established to cover article processing charges in open access journals.
With the help of the library of the University of Bayreuth support for the publication fund has been provided via the programme "Open Access Publizieren" from the "German Research Foundation (DFG)" which is supplemented by a co-funding.
The funding follows a specific distribution key between the faculties, which is based on the numbers of articles supported in the preceding year. Within one faculty the date of application for the funding is used for further distribution.
Members of other faculties can also apply for resources from not used funding. The distribution key is adopted regularly to changes in the funding needed.

How can I apply for funding by the Open Access Publication Fund?

Your article should meet the following needs:
Application for funding is possible as soon as the article is submitted to the open access journal. A notification to the open access commissioner Clemens Engelhardt (University Library) is sufficient.
When applying for funding the following information is needed:
After successful application the funding for the publication is reserved for you and will be assigned after the article has been accepted by the open-access journal. We need the original invoice. If the publisher is from abroad please let the invoice be given to you zero-rated for VAT (without value added tax) as the tax is being paid from us directly. It is necessary that the VAT-ID is mentioned to the publisher and that it is enlisted on the invoice.
The VAT-ID is: DE 811264317.
Each article should include a reference about the funding via the DFG-programme and the University of Bayreuth: "Funded by the Deutsche Forschungsgemeinschaft (DFG, German Research Foundation) – 491183248 [if applicable, please add further DFG project numbers]. Funded by the Open Access Publication Fund of the University of Bayreuth.".
Please be advised: from the year 2022 onward when authors receive a funding from the Open Access Publishing Fund a co-participation fee will be charged to researchers. More detailed modalities will be available on the homepage in due course.

To apply for funding from the Open Access Publishing Fund please use our webform.
Please take notice: Requests for funding or invoices for OA publications can only be processed by the OA team of the UB if a corresponding request has been submitted in parallel via our web form. The web form contains binding guidelines for inserting the Funding Acknowledgement. If the applicant declares that no Funding Acknowledgement will be included in the publication or if the publication does not contain a Funding Acknowledgement after it has been published, funding from the OA Article Fund/Monofund will not be possible and we reserve the right to reclaim any amounts paid as part of the funding.
For further inquiries about funding opportunities, please feel free to contact the OA Support Team: oa@uni-bayreuth.de
More information about the open-access movement can be found 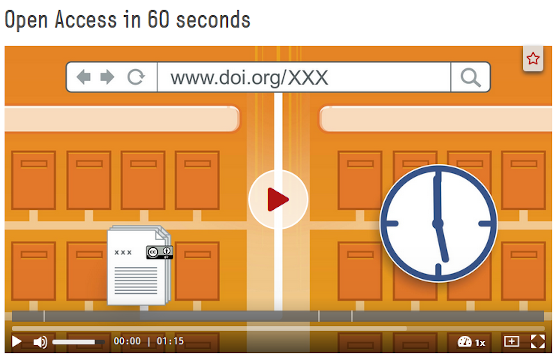